All compatible cameras can use the motion-based masking method to mask all moving objects as compared with the background scene. This masking method supports strict privacy requirements and is suitable for indoor scenes with good, stable lighting.

Compatible DLPU cameras can additionally use the application’s AI-based human recognition masking method to mask humans or faces. The masking method can also be inverted to mask out the background instead. AI-based masking method is suitable for indoor or outdoor scenes in all lighting conditions.

For motion based masking method: To protect privacy, make sure no one is in the scene.

Before you configure the application make sure that your scene meets the criteria specified in this section.

It is recommended that the image is leveled with the horizon.

Barrel distortion is a lens effect where straight lines appear increasingly bent closer to the edges of the frame. If your camera supports barrel distortion correction, make sure to turn it on through the camera´s settings.

The motion-based masking method should preferably be used indoors, where there is a constant light source. It is not ideal outdoors where reflective surfaces, daylight shadows or swaying objects are common.

In the parts of a scene where the pixel density is less than 100 pixels/meter (30 pixels/foot) there is a chance that a person may not be completely masked. Use the free online tool, AXIS Site Designer at https://sitedesigner.axis.com/to calculate the pixel density in your scene. Determine the optimal placement of the camera to achieve an appropriate masking coverage.

How to calculate the pixel density using AXIS Site Designer

Make sure humans are not obscured by, for example, foliage or fences.

Humans needs to move in a somewhat upright position.

A person needs to be close enough to the camera for the application to accurately distinguish their human form.

Avoid reflective surfaces in the scene. The AI-based masking method may fail to mask reflections.

The first step in setting up the application is to select masking method.

Do not configure the application while there are moving objects, which require continuous privacy, in the scene. While changing between settings there is a risk that these objects become visible for a short period of time.

The motion-based masking method masks all pixel changes (i.e. moving objects) as compared with a background scene. It is designed for use in indoor scenes with good, stable lighting and where strict privacy requirements are paramount.

The AI-based masking method determines if a human form appears in a scene and enables masking method of humans or faces. The mask can also be inverted, showing only humans or faces and masking the background. It is suitable for indoor and outdoor applications that want to retain the most detail in an image and can accept that masking may be imperfect in certain instances.

The application masks all relevant objects in the include area.

Use the mouse to reshape and resize the area so that it only covers the part of the image in which objects should be masked. The default rectangle can be changed to a polygon with up to 20 corners.

Use the mouse to move, reshape, and resize the area so that it covers the desired part of the image. The default rectangle can be changed to a polygon with up to 20 corners.

This is a meeting room, where people often sit still for a longer period of time and where there generally is little movement. To avoid people being considered a part of the background image (and being unmasked) we recommend to add a longer background merge time. 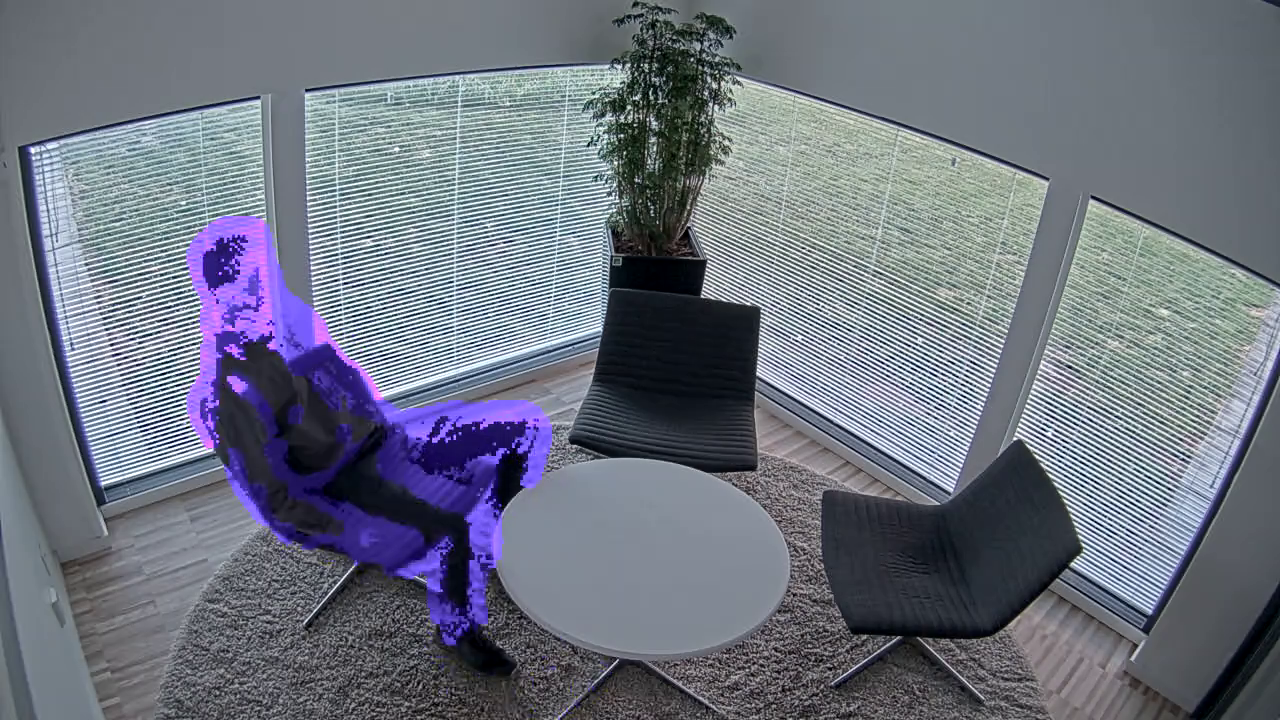 Example of scene where to use a longer background merge time.

If an object (that originally is a part of the background image) is moved from one position to another the application will mask both changes. The two changes from the original background image are:

A scene where a short background merge time is advisable to avoid artifacts.

Setting sensitivity too high will introduce more artifacts in the scene. Setting it too low could mean that some pixels that should be covered are displayed as normal. 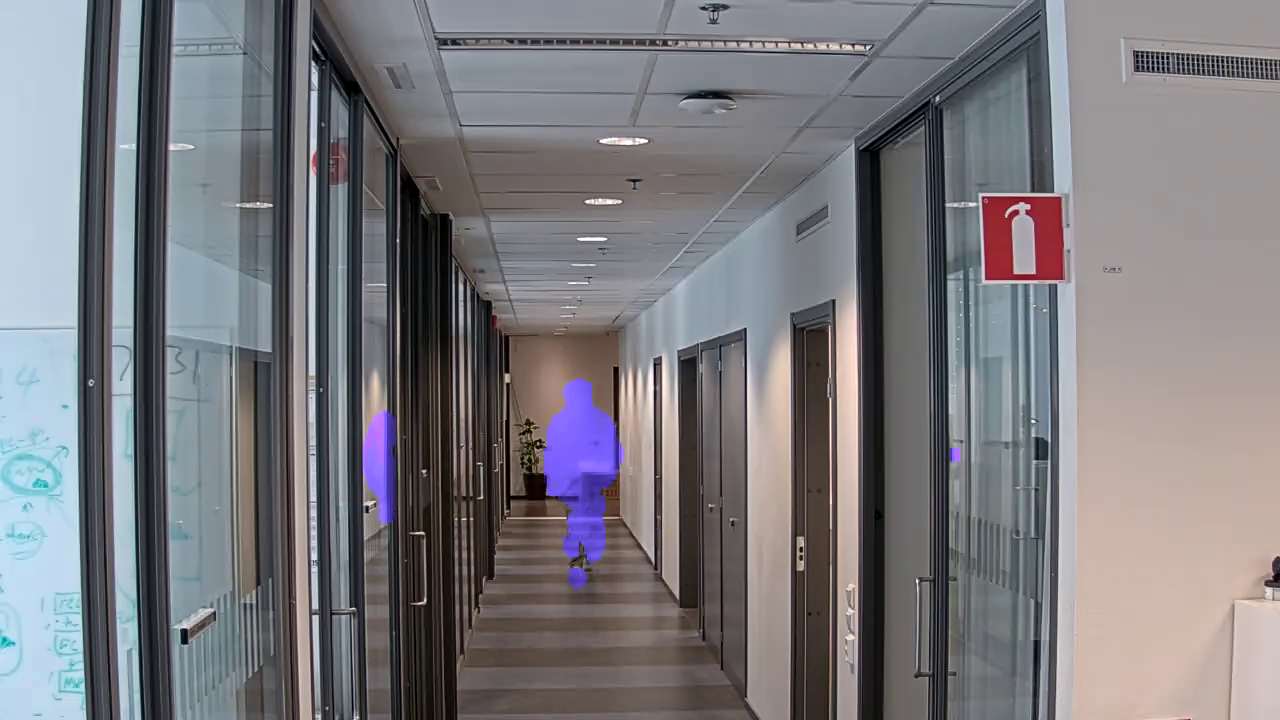 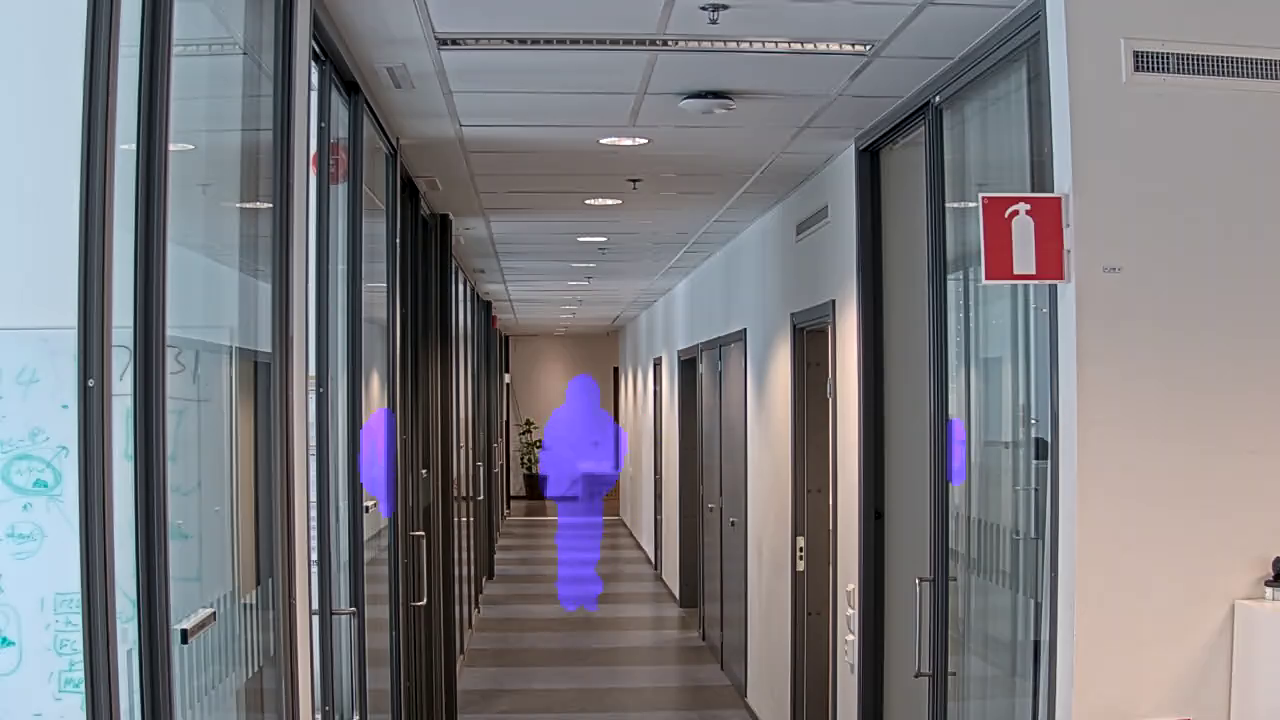 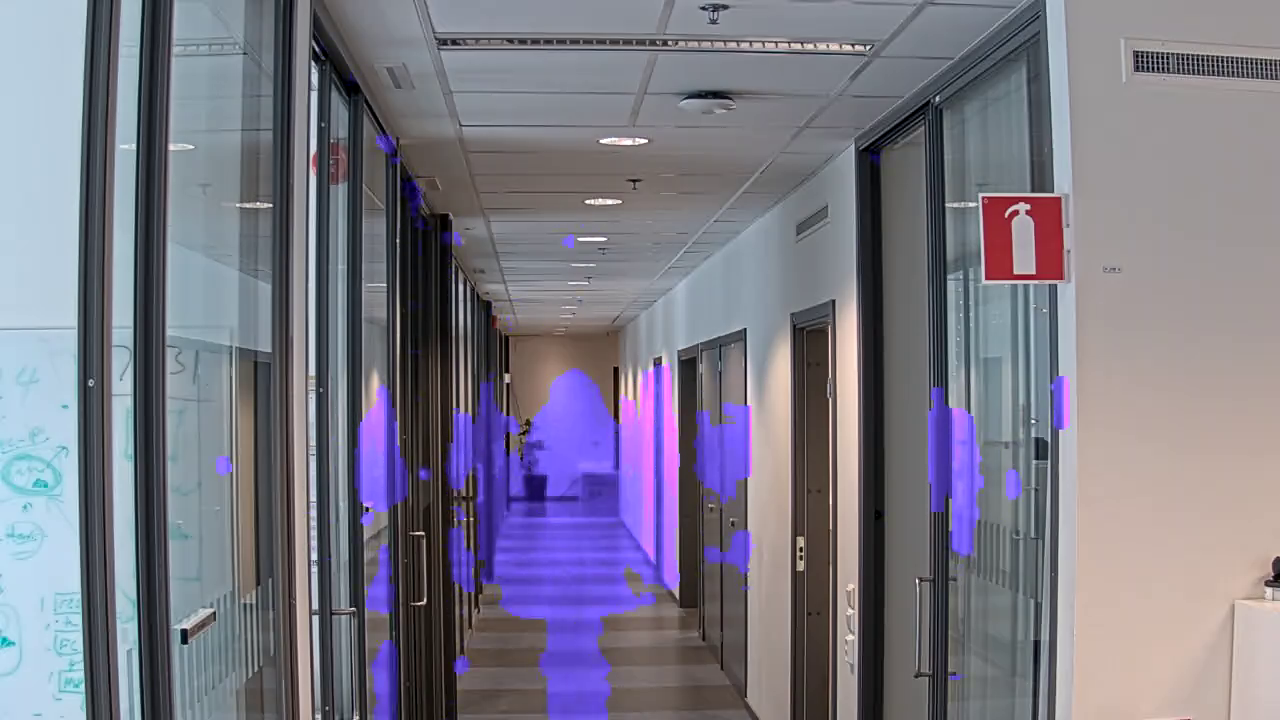 Clean up artifacts or unwanted masked objects. Click Reset background to force a reset of the background scene. This setting is only relevant for motion-based masking method.

Choose whether to prioritize mask detail or frame rate in a stream. The default priority is frame rate.