AXIS Speed Monitor visualizes the speed of vehicles in a radar detection zone in the camera's live view, and logs the radar tracks on the SD card for statistical processing. The application works on Axis cameras, check the compatibility list on the product page.

The application requires an AXIS Radar D2110-VE for the installation, mounted and configured in accordance with the D2110-VE installation guide and the radar white paper.

To be able to log statistics, install the SD card in the device where the app is installed.

Before you set up the connection with the radar and configure the app overlays, you should calibrate the radar for the scene. The radar can be set to run on either Area monitoring or Road Monitoring depending on the use case.

The radar is ready to use as soon as it is installed. The default live view will show the radar coverage and any detected movement, and you can add detection zones and rules right away.

For full radar calibration instructions, see the web manual for the D2110–VE.

Make sure you enable Ignore swaying objects under Settings > Radar > Detection and exclude bushes, trees and signs from the include zones. Avoid having a road sign just in front of the radar.
If you only want statistics of vehicles, go to Settings > RMD Zones and select the zone. Click to Edit zone and under Trigger on, uncheck Human .

How to calibrate the radar 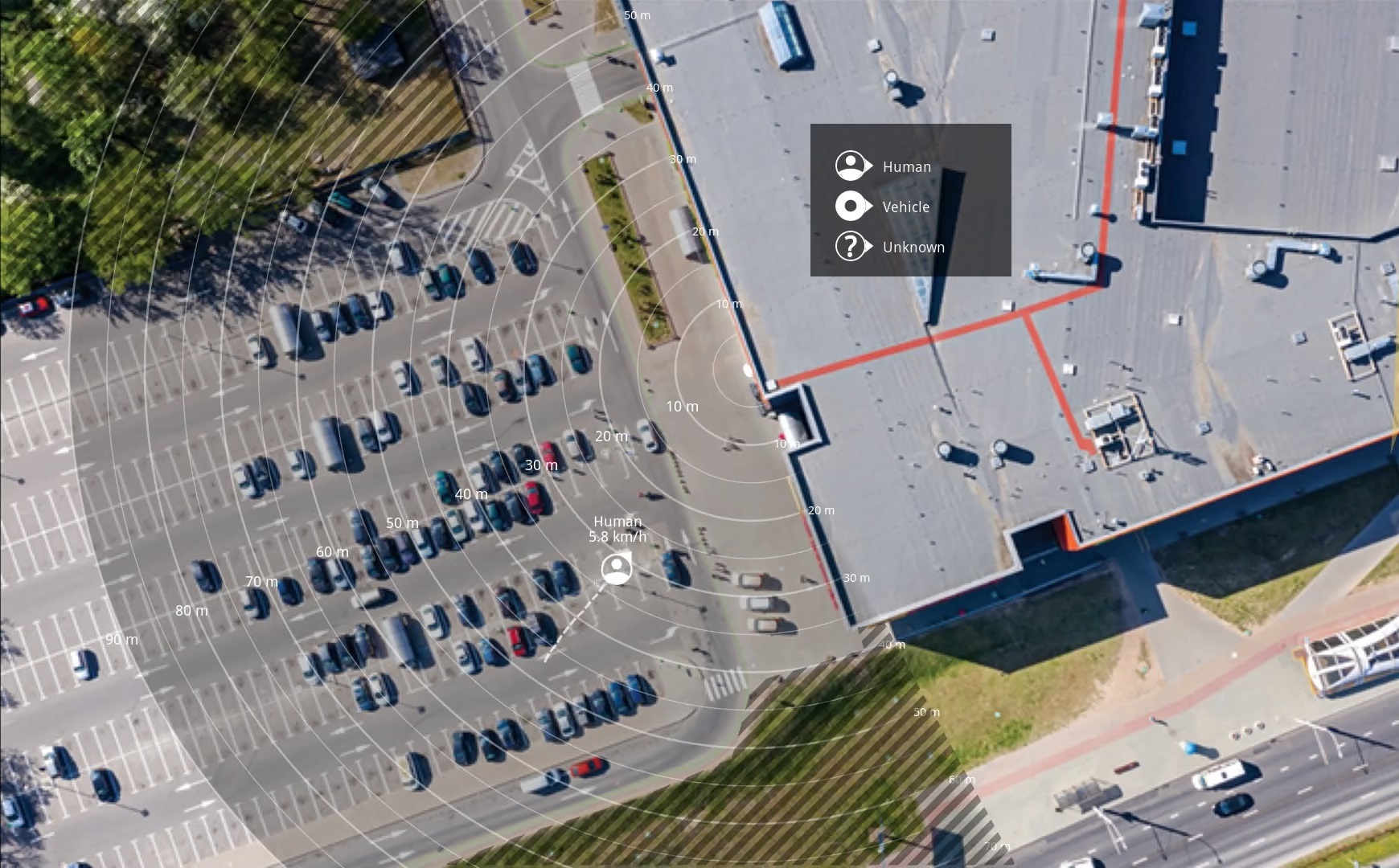 To make it easier to see where objects are moving, you can upload a reference map, for example a ground plan or an aerial photo, that shows the area covered by the radar.

To determine where to detect motion, you can add multiple zones. Different zones can be used to trigger different actions.

Add an include zone

Modify an include zone

Select to modify an include zone.

Area monitoring profile is best used for objects moving at up to 55 km/h (34 mph). This profile allows you to detect whether an object is human, vehicle, or unknown. A rule can be set to trigger an event when any of these objects is detected. If you want to track only vehicles, you should use the Road monitoring profile.

The Area monitoring profile is optimized for human detection, however, it will also allow you to track vehicles and other objects moving at up to 55 km/h (34 mph) with a velocity accuracy of +/- 2 km/h (1.24 mph).

When mounted at the optimal installation height, the detection ranges are:

The Road monitoring profile is best used to track vehicles moving at up to 105 km/h (65 mph) in urban zones, closed zones, and on sub-urban roads. This mode should not be used for detection of humans or other types of objects. To track objects other than vehicles, use your radar in the Area monitoring profile.

To monitor vehicles travelling along a road you can mount the radar on to the side of the road. The radar will provide a lateral coverage distance of 10 m (32 ft).

This mounting option requires a stable position. The radar can be mounted on a pole in the middle of the road or on a bridge above the road. The radar will then provide a lateral coverage distance of 10 m (32 ft) to both sides of the radar. The radar covers a broader lateral distance when center mounted.

We recommend that the radar is mounted at a height between 3 m (10 ft) and 8 m (26 ft) for the Road monitoring profile.

This profile is optimized for detection of vehicles and will produce a velocity accuracy of +/- 2 km/h (1.24 mph) when monitoring vehicles moving at up to 105 km/h (65 mph).

Detection range when the radar is mounted at an optimal installation height:

If the maximum number of radars in the same coexistence zone exceeds two then expect a range degradation of approximately 10% (near) and 20% (far).

An industrial complex with a long road between two warehouses has installed a radar to help enforce a speed limit of 60 km/h (37 mph). In the Road monitoring profile, the radar can detect when a vehicle in its detection zone exceeds that speed. It then triggers an event which sends an email notifications to drivers and managers. The reminder helps increase compliance with the speed restrictions.

Unwanted vehicles on a closed road

A small road out to an old quarry has been closed, however, reports of vehicles driving on the road have resulted in authorities installing a security radar in the Road monitoring profile. The radar is mounted alongside the road and covers the entire width of the road. Whenever a vehicle enters the include zone, it triggers a flashing beacon that warns drivers to leave the road. It also sends a message to the security team so that they can dispatch a unit if needed.

Speed awareness on the road

A road that passes through a small town has had some incidents of speeding. To enforce the speed limit of 70 km/h (43 mph), the traffic control has installed a security radar, in the Road monitoring profile, on a bridge that crosses over the road. This has allowed them to detect the speed that vehicles are travelling at and monitor when they should have units stationed long the road to control the traffic.

Safety with humans and vehicles

Staff at a school have identified two safety issues that they would like to address. They have experienced unwanted visitors entering the premises during the school day, as well as vehicles violating the low speed zone of 20 km/h (12 mph) outside the school. The radar is mounted on a pole, next to the pedestrian walk path. The Area monitoring profile was chosen, as it makes the radar capable of tracking both humans and vehicles moving at speeds lower than 55 km/h (34 mph). This helps the staff keep track of people coming and going during school hours while also being able to trigger a speaker to warn pedestrians when a passing vehicle is driving too fast.

To upgrade the application, just install the new version. There is no need to uninstall the previous version.

In the cameras webpage under Settings>Apps:

You can download the statistics of the day or a set date range. The information in the file includes all detected moving objects within range, and when those objects entered or exited a particular radar motion detection zone. The statistics will be saved as a comma separated file (csv).

Set up rules for events

To learn more, check out our guide Get started with rules for events.

If you make changes to an active rule, the rule must be turned on again for the changes to take effect.

Use an Axis strobe siren to let possible speeders know that your perimeter is protected.

This example explains how to activate a profile in the strobe siren whenever AXIS Speed Monitor detects a speed violation using the connected radar.

For users of AXIS Camera Station

If a device or radar is configured with AXIS Speed Monitor, it is considered as an external data source in AXIS Camera Station. You can connect a view to the data source, search for the object speeds that are captured by the device, and view the related image.