The AXIS Camera Station Integrator Suite is a toolbox that simplifies the delivery of the surveillance system and will help you avoid errors and save both time and money at all stages of the system lifetime. The toolbox consists of the following:

Helpful links for an integrator

Here are some links we think can help you get started. Enjoy the reading!

The workflow to design an Axis end-to-end solution is:

AXIS Site Designer is a web-based tool where you can design system and select products. The tool includes instant access to the complete Axis portfolio. Bandwidth and storage is automatically calculated and suitable recording solutions are recommended. The system design documentation is automatically created and you can easily share the complete design.

How to create a project in AXIS Site Designer

This example describes how you design and configure a solution in AXIS Site Designer. You can then import this configuration to AXIS Camera Station.

Next step: How to import an AXIS Site Designer project

How to import an AXIS Site Designer project

This example describes how you import an AXIS Site Designer project to AXIS Camera Station.

Next step: Test your system

This section explains how to connect to an AXIS Camera Station server from a computer or from a mobile app. You can connect to the server in different ways:

This information is based on AXIS Camera Station 5.16 and higher. These steps can be performed in older versions, but the interface may look different.

Prerequisites:
- An active MyAxis account
- AXIS Camera Station 5.16 or later (You can perform most steps in older versions but the interface might look different.)

Before you can connect to the AXIS Camera Station server from a client device, you must prepare your system. Following instructions will help you manage the general settings.

About user and user groups

For the advanced users:
To make sure you have a Windows- and ACS userID/password, open port xx and yy to configure the mobile app.

To connect to an AXIS Camera Station server from a client device you need a Windows user with the correct permissions. This user can either be the default administrator account on the Windows device the server is installed on, or a user that has been created.

A user or a user group can have one of the following roles:

Click Advanced under each tab for more options to customize the Operator and Viewer accounts.

For AXIS Camera Station version 5 or later:
If your server and client share the same network and have different updated versions, the server will provide the client with information about which version to use at the first connection.

To use local Windows users and user groups, you must add them to the Windows server that AXIS Camera Station is installed on. We recommend that all users have their own account.

When Windows users has been created, they must be added to the AXIS Camera Station.

If you use a local account, we recommend you to login with that user as a test after adding it.

Configure the firewall on the server

During the installation, AXIS Camera Station will automatically configure the Windows firewall exceptions for incoming traffic. If you see a third-party firewall, you might have to request for a similar set of exceptions to be added to the configuration. In most cases only the Inbound port range of 55752 and 55757 requires an exception.

This table shows the different ports in a Typical AXIS Camera Station setup:

When no direct communication can be established, the communication is relayed through the mediator servers. The relayed data transfer is 1 GB per month per MyAxis user.

Connect from the Windows app (client)

Connect from the mobile app (client)

Depending on your system configuration, you might have to use the format domain/user or servername/user

Connect your server via port mapping

Port mapping enables you to connect to your server from a remote location on your router. Depending on your network’s infrastructure, you may have to involve you network administrator to perform this configuration.

Connect from the windows app (client)

Connect from the mobile app

If your server is on a network requiring proxy settings to connect to the internet you may need to add the proxy information to the service.

If you use a Windows app that requires a proxy to access certain websites you need to configure the AXIS Camera Station client to use the same proxy server.

Port mapping more than one server.

If you run more than one server on the same network requiring port mapping, you must change the AXIS Camera Station default port (55752).. Each server must have a unique port.

For each server do the following:

AXIS Installation Verifier is a tool, embedded in AXIS Camera Station version 5.02 or later. It verifies that your system is working as it should by running a series of tests once you've completed the system installation and configuration.

The AXIS Installation Verifier mimics the recording part of the AXIS Camera Station server. The tool performs one test with the current settings, one test with emulated low light test and then also a stress test in order to find the system's bottlenecks.

AXIS Installation Verifier generates a verification report in PDF format and you can hand the report over to the customer.

How to run AXIS Installation Verifier

How to analyze and understand the report

The report is a PDF file which can be handed-over from the system integrator to the end customer once the installation is complete and the system validated. 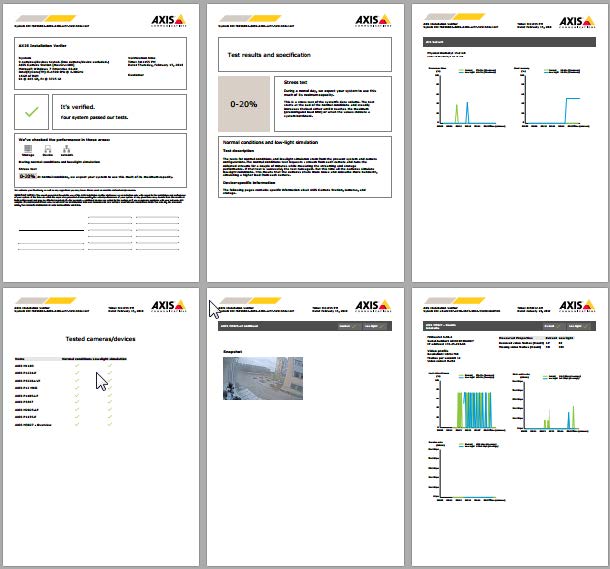 The first section of the first page contains information about the system, such as hardware, operating system, date and time the tests were executed. There is also an area where you can write the customer’s name.

The second section indicates the results of the tests. Each test (normal conditions, low-light and stress test) has a duration of 5 minutes. Storage, devices and network are the three areas tested by the tool. There are two possible outcomes to the verification:

At the bottom of the first page, there is an area where you can enter customer information, comments on the test or any other necessary information. 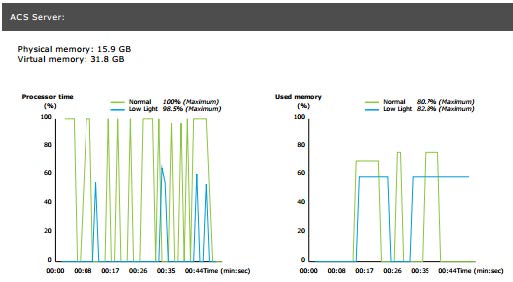 The physical and virtual memory is indicated at the top of the page.

The AXIS Camera Station server is tested against two metrics: 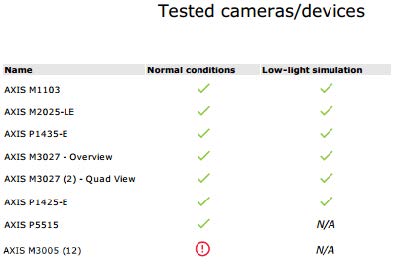 The list of tested cameras and devices is presented on the next page. A device can contain several cameras. Example: multi-sensor devices or multi-channel encoders are counted as one device but 3, 4, or even 16 cameras (one camera per sensor/channel).

Minor adjustments which can improve the installation but will not fail the test that are listed on this page. For example when the default router is not in the same subnet as the device or when the DNS or NTP server is missing.

If a device does not support any of the tests, it will be excluded. The following devices will not be tested:

All camera information such as firmware, serial number, IP address and the video profile used for recording is listed. There is also a summary of the received and missing video frames for each of the tests.

The Device configuration section lists the most important information from the tested device. If some parameters are incorrect (not configured or different subnet), an exclamation mark will be displayed in front of the parameter.

The graphs show the three metrics measured during the duration of the test, for normal and low-light conditions.

In the graph below, the lost video frames quota is high. 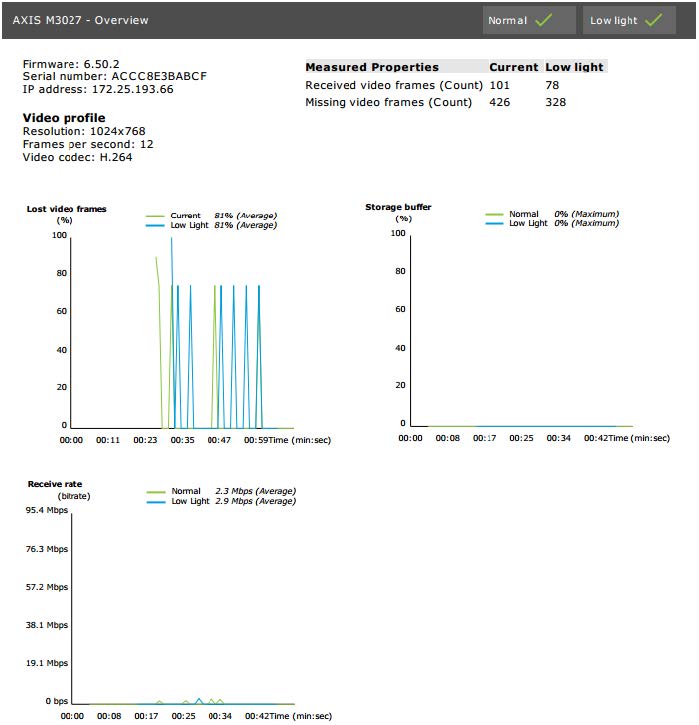 The most likely reasons for this are:

An additional frame lost criterion is considered when running the normal and low light test:

Below is an example where the test criterion was not met for the normal and low light test: 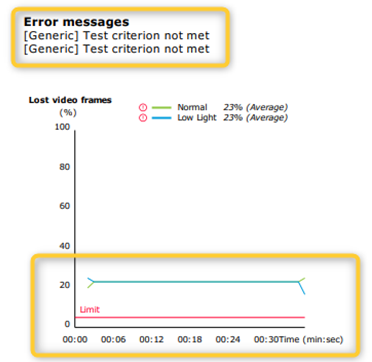 The graph below shows an example of a test which couldn’t complete. The most likely reasons for this are: 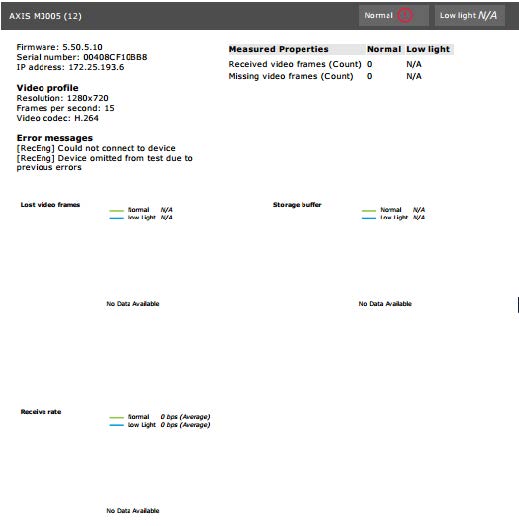 After the camera’s test results, a snapshot from the camera is displayed: 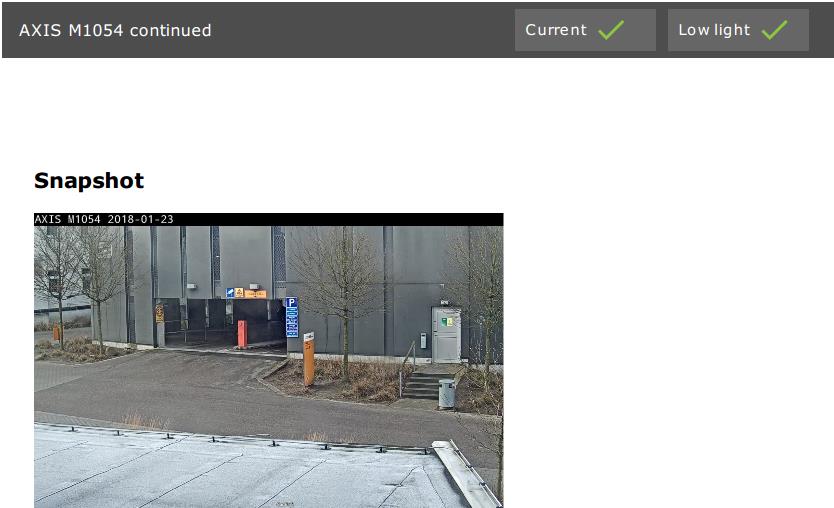 Storage devices are tested against the same conditions.

Information about storage usage and capacity is available:

Total capacity: The total size of the storage.

Other data: Data which is not indexed by the AXIS Camera Station server. This may be external files such as random documents, Operating system files, files in the recycle bin.

Maximum usage: Recording limit set in AXIS Camera Station. AXIS Camera Station will allocate a maximum percentage of the storage for its recording files. By default, this value is set to 99% for non-OS drives and to total size-60GB for OS drives. 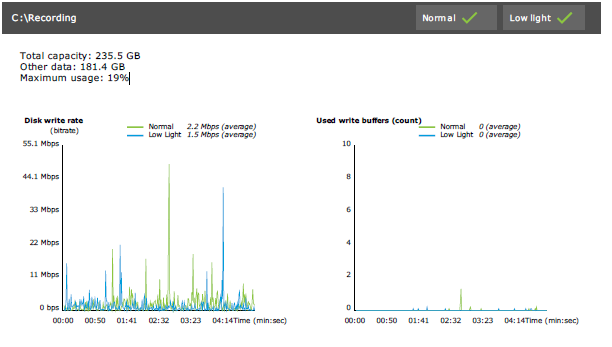 If any of the test fails (Failed), no report will be generated. We recommend to take a snapshot of the test window, generate an AXIS Camera Station system report from the help menu and contact Axis Support via the online helpdesk.

There is a difference between Not passed and Failed:
- Not passed indicates that the server, some devices or the storage didn’t fulfil the conditions to pass the test.
- Failed means that the test did not complete and no conclusion regarding the system performance is available. 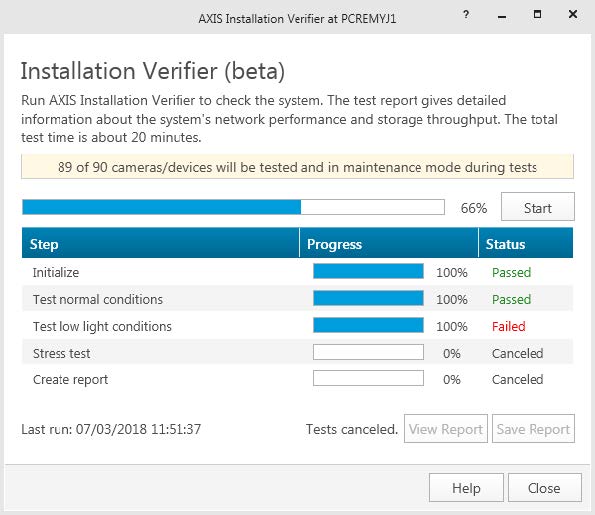 Set up Axis products in your system

When you use AXIS S3008 Recorder as recording storage for your devices in AXIS Camera Station, there are some limitations:

Add devices and select the recorder as recording storage

This section explains how to set up AXIS A1601 Network Door Controller in AXIS Camera Station. To see the videos about how to set up, go to this playlist.

This example explains how to:

This system setup is suitable for non-life critical systems, for example intruder alarms or staff and customer address. Specific guidelines and standards (local to the installation) have to be met for implementation in critical systems, such as fire evacuation.

In the camera’s live view in AXIS Camera Station, there is now a button labelled Staff to till. When you click the button, the audio device plays the audio clip.

When an Axis PTZ camera is configured with AXIS PTZ Autotracking, you can use the camera in AXIS Camera Station to automatically detect and follow moving objects such as people or vehicles in its field of view. It is intended for indoor or outdoor use in low-traffic areas such as parking lots or during after-business hours at schools, offices and stores.

When a device is configured with AXIS License Plate Verifier, it is considered as an external data source in AXIS Camera Station. You can connect a view to the data source, search for the license plates that are captured by the device, and view the image of the license plates.

This section explains how to integrate AXIS Perimeter Defender with Axis Camera Station’s event system. You’ll learn how to: